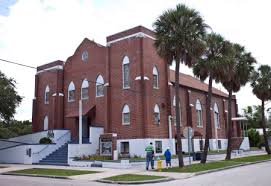 In 1904 a band of God-fearing men and women saw the necessity of organizing in West Hyde Park a Sunday school in which their children could easily assemble to learn God’s Word. This Sunday School included both Methodists and Baptists, and Deacon J. L. Stanley served as Superintendent. This nucleus served as the only means of worship for most of the people because all of the Negro churches were located on the east side of town.  Being led by the Holy Spirit, Deacon, J. C. Price, a member of Beulah Baptist Church, and Deacon J. L. Stanley called the Baptists together in West Hyde Park and founded the New Salem Missionary Baptist Church in 1906, A parcel of land was bought on which to erect a temple of Worship in the 400 block of South Oregon Avenue, A small building housed these humble, but determined Worshipers for a few years. Rev. H.H. James was called as the first Pastor. Other ministers responsible for leading this church during its infancy were Reverends Frank James, H. K. Morehead, J. H. Horton, W. Jones, J. R. Sanders, and P.H. James.

Rev. P.H. Jackson, began his tenure in 1939 and served until June 1951. Under his leadership, the church grew numerically as well as spiritually, A utility building was constructed during his first year, and a parsonage adjacent to the church was purchased. In 1945, the site for the edifice was purchased; construction began in march 1946. In 1950, New Salem marched into the new church. The Floral, Boosters, and Loyalty Clubs were organized during Rev. Jackson’s pastorate.

Rev. H.W. Wilburn served with vigor and enthusiasm from July 1952 through  December 1964. During his tenure, new pews were installed, a lot for parking was purchased, the communion room was added to the edifice and the Mother’s Board was organized.

Rev. W. H. Gordon, was called in February 1965. Under his leadership, The Young Adults Choir and the No. 2 Usher Board were organized; two young men, Brothers Harry Harris and Alfred Ward answered the call to the ministry and were licensed. Before Rev. Gordon was called to his mother’s church in April of 1967, he implemented the installation of an Air Condition and Heating System and the completion of several repair and beautification projects.

Rev. J.W. Deering, then Director of the Baptist Fellowship Center picked up the reins in July 1967. He powerfully preached and taught tithing and the importance of Christian visitation, witnessing and soul winning. One of the greatest Revivals ever witnessed at New Salem was held during this reaching  ministers tenure. Rev. Deering actively encouraged support of our church related educational institutions and continuously stressed the need for religious training.  Rev. Harry Harris was ordained into the ministry om Jan. 7, 1968, A new parsonage was purchased in Oct, 1968.

In July 1969 the Rev. Howard Storr was installed as the new religious leader and served  until April 1973. During his pastorate New Salem hosted the Women of the Baptist General State Convention in April of 1971 and the West Coast District Sunday School and B.T.U. Congress in 1972. Renovations during this period included the restrooms in the lower unit of the church and the paving of the parking lot.

Rev. J.P. Saunders,  a neophyte, was called in 1973. Guided by this quiet spoken leader, the Brotherhood and the Junior Church were revitalized; the Baptist Young Women were organized. The edifice underwent extensive renovations in 1978. Brother George Martin answered the call to the Ministry and was licensed in July 1974. He was subsequently ordained in 1980. Deacon Jeffrey Wilson also responded to the call and was ordained in 1980. Six Deacons were ordained. In 1980 the Church hosted the West Coast District Congress of Christian  Education. Rev. Saunders was instrumental in New Salem’s participation in the last Tampa Bay Area Billy Graham Crusade held at Tampa Stadium. In 1981, the church hosted the Young Matron’s Department of the Baptist General State Convention of Florida. Olin Doby was the Church’s contestant in the Oratorical contest sponsored by the State Congress of Christian Education. After becoming the State’s winner, he continued to compete nationally and placed third at the National Baptist Convention, USA,  Inc. which convened in Detroit, Michigan, in September 1981. A new bus was purchased in 1980, enabling  the church to participate in a newly organized program of witnessing at area prisons in conjunction with the Prison Crusade. The Crusade for Christ Choir was organized in conjunction with the First Baptist Church of Keystone, and this choir has accompanied Rev. Saunders to many prisons throughout  the state, and has done further witnessing on its own under the direction of Sister Lillie M. Madison and Sister Massalena Britt. Its annual program “On Fire For Jesus” is highly acclaimed throughout the city. The, Church’s membership continues to grow under Rev. Saunders’ leadership. In 1991, Rev. Saunders announced his retirement.

After seven months of prayerful search and consideration, the Lord answered the prayers of our church family and sent a dedicated servant of God to lead His flock. Young, energetic, and grounded in the word, Rev. P. Fitzgerald Readon Sr., was a blessing to the New Salem Family. The church body remained in constant prayer, seeking the Lord under the leadership of Pastor Readon the voices of Joy, and the voices of Praise were organized. Three deacons were ordained, Ronald Graham, Lewis O’Neal, and Boris Goins. The Golden Angels came into being with Pastor Emeritus Saunders as President. Pastor Readon worked untiringly on revitalizing the Dobyville community; strengthening the young adult, youth and children ministries; and equipping saints through the study of Gods word. Under Pastor Readon, the church purchased a parsonage, a new van, received funds to create a computer lab, and several parcels of property.

In January 2004, Dr. Henry J. Lyons joined our fellowship as the servant/teacher. He unselfishly shared his expertise in church growth as he piloted New Salem through challenging circumstances. In a few short months, the  membership and its ministries were revitalized. Through the working of the Holy Spirit and under Dr. Lyons leadership; the church experienced extraordinary growth by emphasizing a return to love and fellowship among the membership. Under the leadership of Dr. Lyons the church leased the property known as 303 N. Oregon Street (the Store0 adjacent to the edifice. The building was totally renovated and turned into a thrift store and served the community. IN 2004, Dr. Lyons led a project renovation of the lower unit of the church (Fellowship Hall) and some parts of the upstairs sanctuary and on September 11, 2005 the fellowship hall was dedicated as the Jackson/Saunders Fellowship Hall. In October 2005 the church purchased the property at 1328 Fig Street,. The parsonage was paid off in 2005 and new 2006 14 passenger van was purchased. 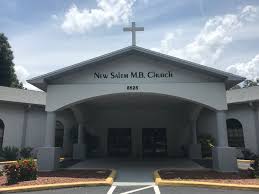 In the month of August 2007, a three year search ended when we found the acreage to build the church sanctuary on. The Lord led us through three different parcels of property before we discovered this choice land, located at Interstate Four and Highway 301, there God our Father put His grace. The church found favor with a financial institution, where by the Lord provided the means for the property to be purchased. We approached this significant landmark in  our history with prayer and thanksgiving.

Arise, shine, for your light has come, and the glory of the Lord rises upon you.
Isaiah 60:1
Copyright © 2020 New Salem Missionary Baptist Church.